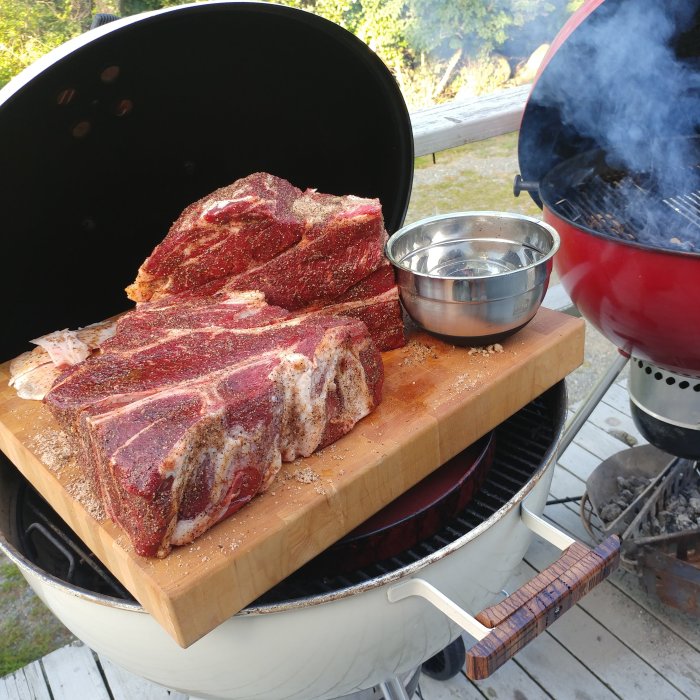 My lovely wife Kate got me a Slow N Sear for my 22 inch kettles and I’m finally getting around to reviewing and using it.

To purchase and read other first hand  reviews- click here

The first thing you notice about it when you take it out of the box is the build quality.  It’s made out of heavy duty stainless steel and won’t be rotting away any time soon.

The main reason for getting the Slow N Sear for my purposes is for cooking large hunks of meat that take up a lot of grill space.  For this cook it was two large seven bone chuck roasts that if I was using the snake method, after about five hours the snake would wrap around and end up directly under the meat, causing fat to drip and meat to burn- no bueno.

The Slow N Sear keeps the charcoal contained to one side.  It also protects the porcelain coating on your nicer grills from having lots of coals banked up along the side with it’s heavy stainless construction.  It also keeps a nice moist cooking environment with it’s removable water pan (in the 2.0 version).  The water pan can also be removed giving you more room for coals and longer cook times without refueling.

For this cook I tried to follow the manufacturer instructions closely.  I lit a Weber starter cube in one corner and arranged about 7 coals around it.  When placing the coals around the lit starter cube be careful to not snuff out the starter cube.  I didn’t snuff it out but I could see how it could happen if you weren’t careful.

After the coals were going sufficiently I filled the rest of the Slow N Sear 2.0 with briquettes leaving a little space for some peach wood (thanks Joe Ball) and cherry wood chips.

Next I boiled a quart of water and carefully poured it into the water pan.  it sizzled (just like the manufacturer said it would) so I’d recommend you pour it using a oven mitt in case of splatter.

After that closed the lid and let the kettle come up to 175 degrees before adjusting the vents.  I closed the top vent 1/2 way and the bottom vent about half way and later adjusted the top vent to closed about 3/4 of the way. 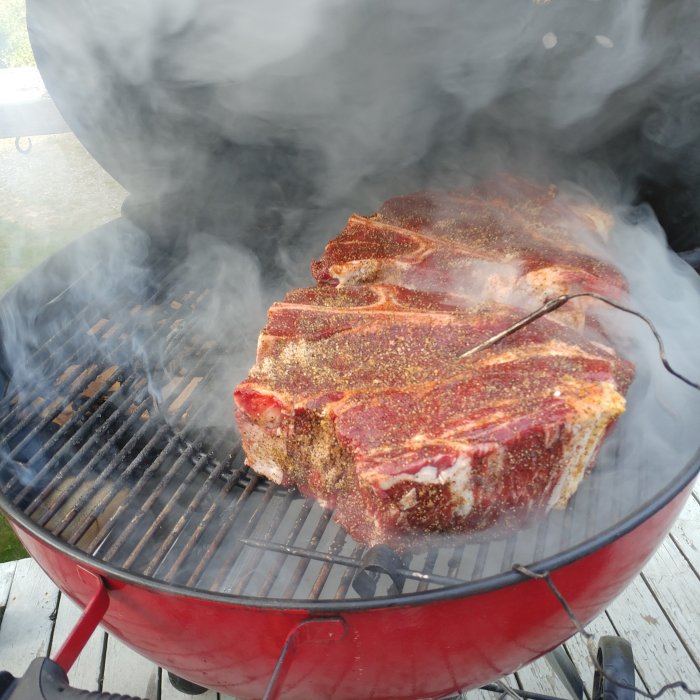 At 10AM she was rocking along at about 250-260 and at 12:30 the temps dropped a little to the 210 range.  I still had spent coals and some that weren’t lit yet in the end of the Slow N Sear opposite the end where we initially started the coals with the starter cube.  The charcoal grate temps dropped to 210 and then 200 right around the time the chucks were entering the stall at 160 degrees F internal.  scratching my head I figured out why.  It was dropping because the spent ash needed to be knocked down.  It was restricting air flow.  This is shown in a video by Baby Back Maniac in a YouTube who shows that you clear your spent ash when you refuel. 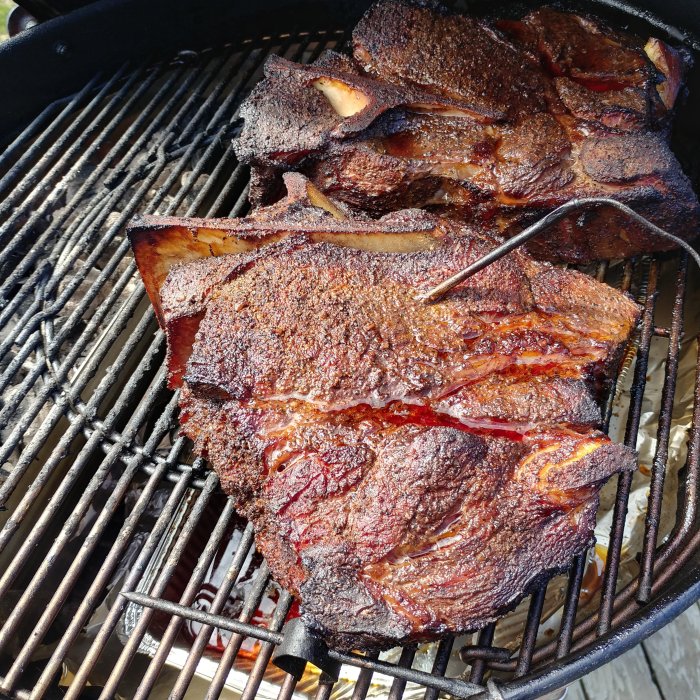 So I added about a third of a chimney of unlit briquettes to the Slow N Sear after knocking down the spent ash and we were back on track.

At 2:30 the chucks were at 173 degrees F internal and I wrapped them in double foil and placed them back on the kettle and opened the top vent all the way and the bottom vent about half way letting the kettle climb up to around 270-280. 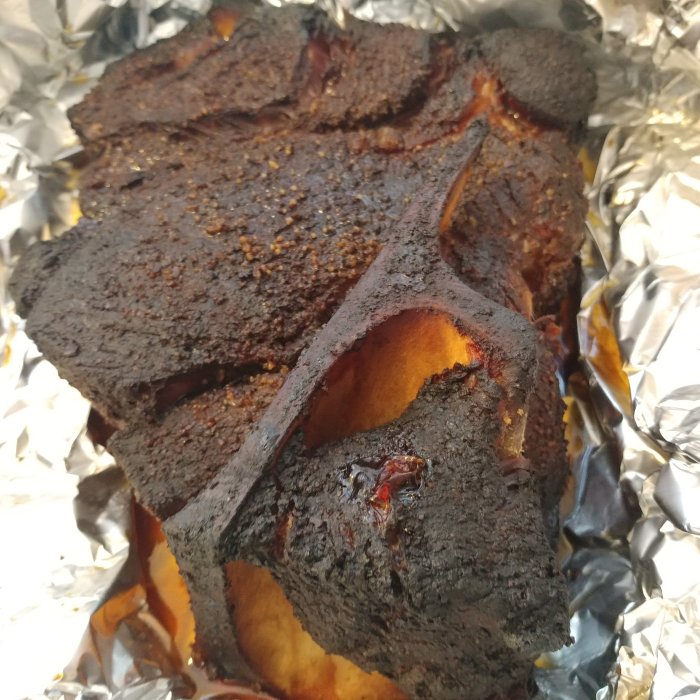 Once the chucks reached 205 I pulled them off, put them on a cutting board, poured the drippings from the foil pan and juices from inside the foil wrap into a bowl and mixed it with the beef as I shredded it.  The chucks rendered down perfectly and were all jiggly and moist and incredibly flavorful.  The guests devoured the pulled beef on rolls made by my friend Susan Lipsett and mango slaw from my Sister Felicia and Sweet Baby Rays Vidalia Onion BBQ Sauce. 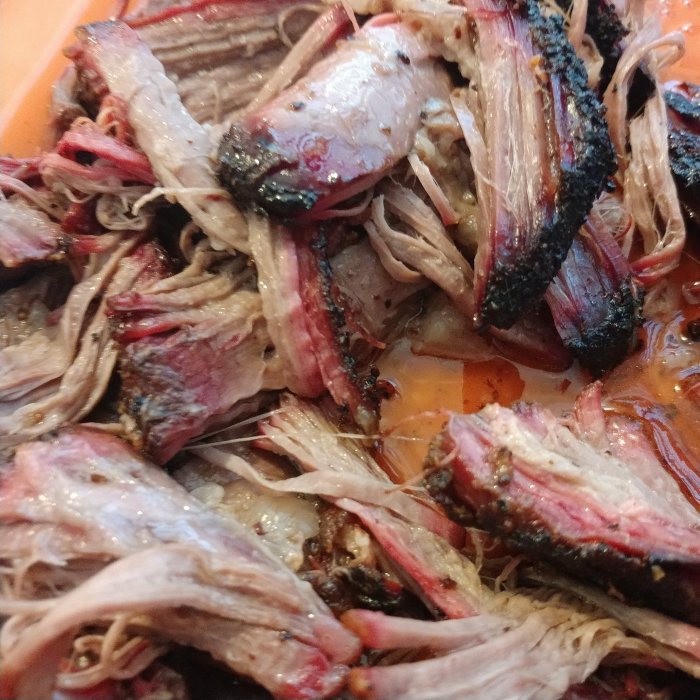 The Slow N Sear is an excellent piece of equipment.  It is well built, well designed and helps maintain temps for long cooks with large cuts of meat weather it be ribs or brisket of big slabs of chuck.

I recommend it if you cook a lot of large cuts of meat like full packer briskets or multiple pork butts.

To purchase and read other first hand  reviews- click here